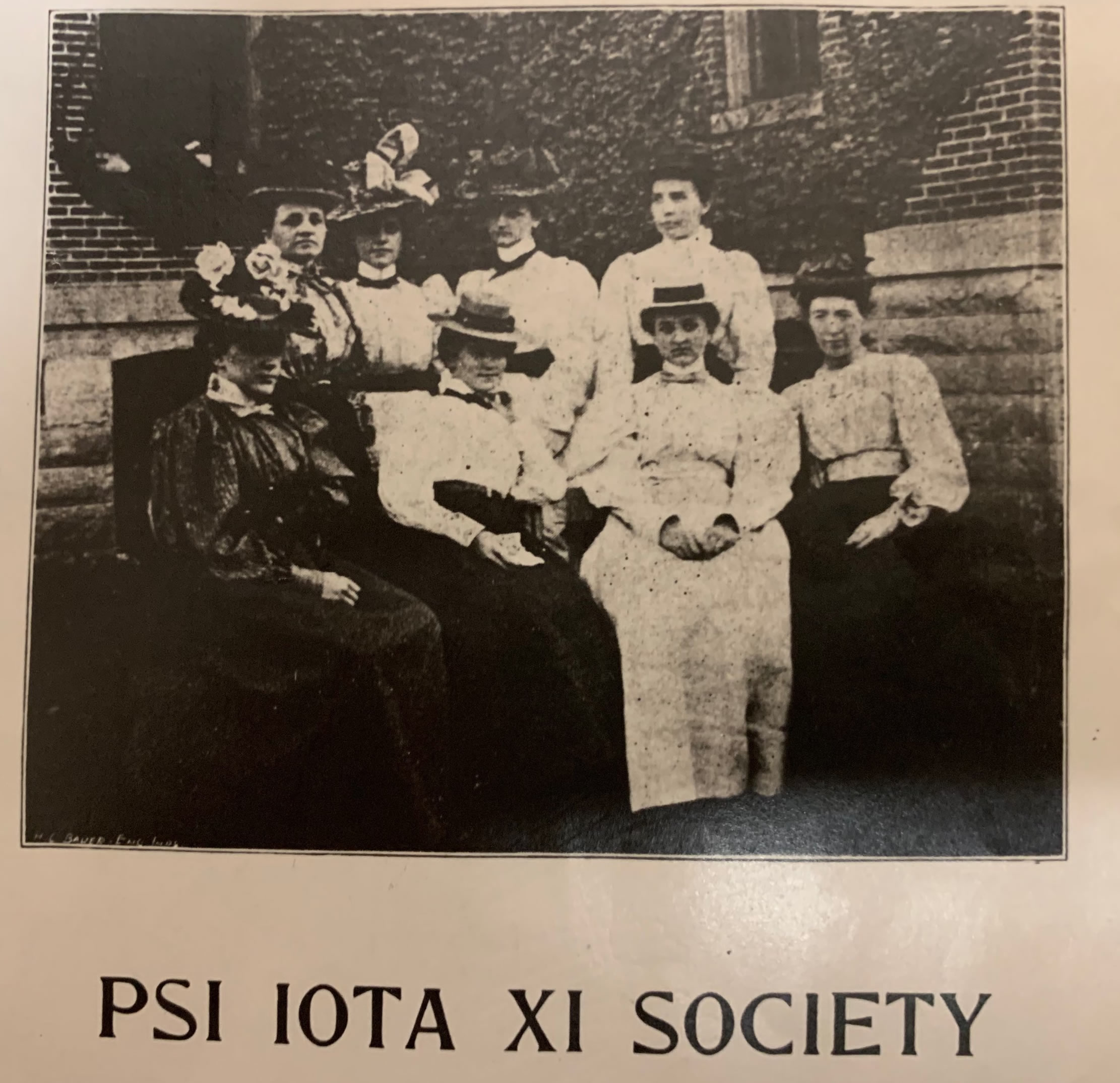 Founded on September 19, 1897 by a group of five high school girls and their three teachers in Central High School in Muncie, Indiana, Psi Iota Xi (PIX) was the first Greek letter organization of its kind in Indiana. Alpha chapter’s purpose was for its members to find self-direction and personal growth while seeking to enrich the lives of others by furthering philanthropic enterprises.

Emma Cammack, one of the teachers, composed the original ritual, which endures today. The girls designed the diamond shaped pin, chose old gold and turquoise blue for their colors, and selected the white carnation for their flower. Later, the yellow rose became the sorority’s choice.

Mary Louise Carmichael, one of the original members, edited the first Helicon. This was one of the main objectives in forming the organization and it is now the official annual publication of Psi Iota Xi. The Helicon derived its name from the “Abode of Apollo and the Nine Muses.” In 1899, Central High School assumed publication of the Helicon, but in1901, Psi Iota Xi resumed direct editorship and it has so remained throughout the years of our organization.

On December 26, 1900, the Beta Chapter of Evansville, Indiana became the second chapter. By 1910, there were ten chapters. Due to enactment of state laws banning secret organizations in Indiana high schools, all activities of this type had to be removed from high school. In order to remain active as an organization, no one could be pledged and initiated until after graduation.

Alpha Chapter sponsored the first convention in Muncie in 1903. Helen Spain from Delta Chapter, Indianapolis, wrote the words for the National song in 1905. In 1915, the sorority established the first National Scholarship fund. Two girls from the mountains of Tennessee were our first recipients. Since that time, thousands of scholarships have been given to deserving individuals.

During World War I, we purchased an ambulance for use in France and sent money to help support a French orphan. All chapters devoted themselves to very worthy war work. After the war, hospital work of some kind was agreed upon as our National project.

In 1932 Meyer and Alexander, Psi Iota Xi official jeweler at that time, donated the first achievement award to be given annually to the chapter making the most outstanding contribution. In the same year the jewelers designed and presented a National President’s pin for the President to wear during her year in that office. At this time, the national jeweler continues to give a jeweled pin to the outgoing National President.

For three quarters of a century, Psi Iota Xi has given financial support to Riley Hospital. In 1922, the sorority was the first women’s organization to contribute to Riley, donating $5,000, an exceptionally healthy gift for the time equal to $87,000 in 2022 dollars, to equip a hospital ward. With this donation, underwriting therapy for handicapped children became a national project. In 1925, we gave $600 to the same hospital for the erection of a shelter house. In 1931, $10,000, a very sizable contribution to be made during the Depression years, was given to purchase an oxygen chamber. Thus, Psi Iota Xi pioneered by becoming the first organization to bring oxygen therapy to Indiana. Between 1932 and 1936, thirty five oxygenaires, and twenty five insufflators were presented to communities in which there were Psi Iota Xi chapters. The sorority continues to recognize the needs of the hospital and the Riley Audiology and Speech Clinic, providing diagnostic, therapeutic, and other assistance to children with special speech and hearing problems who are referred to the hospital. In 1972, the sorority purchased an electronic device, the Evoked Response Audiometer. In 1975, 1976 and 1977 sponsored a Psi Iota Xi “Fellow in Speech Pathology at the I.U. Medical Center Audiology and Speech Clinic”.

In 1935, an Annual short story contest in which high school girls participated became one of our national projects and was continued for five years.

At the time of the 1937 flood, our members in New Albany and Jeffersonville chapters suffered such heavy losses that national Psi Iota Xi gave $1500 to them for distribution on a per-capita basis.

1938 was an eventful and history-making year for Psi Iota Xi. The sorority discovered the field in which they have since become Nationally known – Speech Pathology and Audiology. They were the first organization in the state to recognize the need for Speech and Hearing correction among children and to appropriate funds for this project. Authorities have informed the sorority that Psi Iota Xi was the first organization in the country to give active support to a Traveling Clinic. Psi Otes voted a grant of $10,000 to finance this mobile clinic which, over a two year period, visited every school in Indiana.

During this period of time, over 6,000 handicapped children were tested. As a direct result of the interest aroused by this traveling clinic the Indiana State Legislature presented and passed a bill requiring speech correction in the state’s public schools. Following this program, a residence clinic was established at Indiana University.

While Psi Iota Xi has become best known for its efforts in the Speech and Hearing area, it has continued its support to the cultural pursuits that the founders began. Music has played a very important role in the life of Psi Iota Xi. In 1938, Psi Iota Xi became the first organization to contribute to the Endowment fund of the Indianapolis Symphony by establishing an endowment fund with $1500. That same year Miss Elsie Sweeney, a charter member of the Columbus, Indiana chapter proposed to match any amount we would donate to a symphony. With Miss Sweeney’s contribution, a block of student season tickets are purchased. To this day, tickets are available and may be requested by the chapters for music loving high school students to attend the symphony concerts.

In 1940, Psi Iota Xi included a second cultural project, the Hoosier Salon Patrons Association. The sorority’s support of the Salon began by offering three purchase prizes annually at the cost of . At Convention each year these pictures are presented to chapters through drawings. At the Convention in 1950 Psi Otes increased the contribution to the Hoosier Salon by giving an outstanding artist a “Jury Prize of Distinction.”

During World War II, Psi Iota Xi bought War Bonds valued at $5,000, to purchased an ambulance mobile unit for the Red Cross, have furniture for forty screened porches at Camp Atterbury Hospital, and did much war work in various communities. During the war years, Conventions were brief, and in 1945 there was no Convention to comply with government restrictions on meetings of more than 50 people. Psi Otes continued their loyal support to all its projects.

Psi Iota Xi initiated support in 1946 of the Summer Boarding Speech and Hearing Clinic at Ball State for eight to twelve year old children with speech and hearing handicaps. In addition, fifteen outstanding high school students, each sponsored by a Psi Ote chapter, were chosen by Ball State to attend a three day recruitment program conducted during the operation of the Clinic.

In 1951, we increased our cultural program to include participation in a National Scholastics Art Award in both Indiana and Ohio. The awards were to be used in furthering the art education of students in accredited art schools and continued until 1953 in Indiana and 1954 in Ohio.

In 1952, Psi Iota Xi started our volunteer support of the Mental Health Program. On a voluntary basis, chapters were urged to purchase, wrap, and deliver Christmas gifts for the children in our three Mental Hospitals at Fort Wayne, New Castle and Muscatatuck. In 1960, Psi Iota Xi chapters contributed 2550 holiday gifts with a total value of $3,271.52. The extent to which the chapters contribute to this program each year was widely recognized an greatly appreciated by the Mental Health Association.

Another first for Psi Iota Xi in 1953 was the giving of a $2,000 grant to Speech and Hearing Kindergarten in Indianapolis. This was a first effort to bring help to the pre-school child with a hearing loss. That same year our number of National Projects were increased to embody two $500 “return and serve” scholarships to superior students in graduate courses in psychiatrics social work at Indiana University’s Division of Social Services. This was discontinued in 1956 due to lack of funds.

At the 1957 Convention another first was recorded. We voted to cooperate with Purdue University in starting a recruitment program for Speech and Hearing Therapists in the form of a “Pre-College Institute,” available to high school junior girls. As a result of the success of this program, Ball State University, Western Michigan University, Indiana University, and Ohio State University followed in this project. In 1976, Purdue replaced this project with a Clinician Training Project using the Inter-active Television Colloquium Series on the Communicatively Handicapped. In participating, speech pathologists and audiologists holding an Indiana license receive continuing professional education toward renewal of their license.

Since 1963 Psi Iota Xi has presented cash awards to outstanding voice students at the Tri-State Metropolitan Opera Regional Auditions held each year at one of the Universities of Ohio, Kentucky, West Virginia or Indiana.

An entirely new project enabling students in the speech and hearing field to work for pay during the summer at the Trade Winds Rehabilitation Center in Gary, Indiana was voted and undertaken in 1970.

These are just a few of the many and various programs and projects, both Philanthropic and Cultural, that are proposed by chapters and voted upon each year at National Convention, and that Psi Iota Xi has undertaken throughout the years. Flexibility is necessary and most important in this constantly changing world.

Psi Iota Xi boasts having chapters located in Indiana, Ohio, Michigan, Illinois, and Kentucky. The chapters are divided geographically into six districts. Each chapter is governed by National Bylaws as well as local chapter bylaws and are presided over by our National Council. Each chapter formulates its own philanthropic program, determined by the needs of the community in which it is located.

Each member has the obligation of helping to establish the program she wishes the chapter to follow and to work on the various fund raising projects necessary to carry on the work of these programs. Community service, as well as financial donations to philanthropies, make up the work done by the members of Psi Iota Xi.

A large amount of money is spent annually in Psi Iota Xi communities by the combined efforts of all the chapters, as aid to those less fortunate.

So here’s to the Psi Iota XI,

Wherever she may be,

May her friendships never die

But live to eternity.

May she be true to the turquoise blue,

And reverence the dear old gold;

And prosper a thousand fold.

So solemnly we take our vows,

And sing her praise a thousand ways

From coast to bare inlet.

The present day may pass away,

But in the future years,

The thoughts of you, the gold, the blue,

Will fill our eyes with tears;

The thoughts of you, so good, so true,

Will fill our eyes with tears